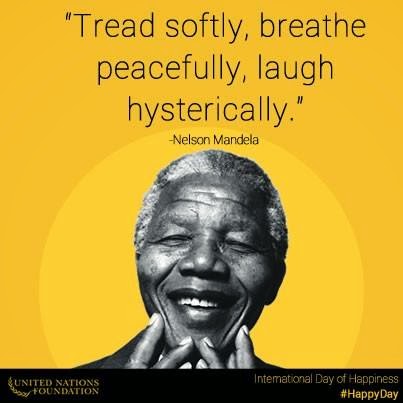 I have written in an earlier article why I agree that we urgently need an approach that aims at a higher goal rather materialistic 'wealth' in my blog on "Happiness as a UN goal? The Inside-Out Development Paradigm?". A happiness day can raise awareness with people and policy makers alike to explore more holistic approaches to human development.

"The world needs a new economic paradigm that recognizes the parity between the three pillars of sustainable development. Social, economic and environmental well-being are indivisible. Together they define gross global happiness.”
-UN Secretary General Ban Ki-moon 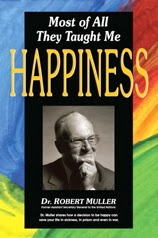 One of the most inspiring books in this regard I have ever read is "Most of All, They Taught Me Happiness" by Robert Muller (here on Amazon). The book is a fascinating life story of an authentic person embodying the spirit and value of the UN. I therefore highly recommend it to anyone who wants to be inspired and learn about the UN's evolution.

Muller fought in WWII and developed a passion to overcome wars by uniting countries beyond borders. He first joined the UN as an intern and rose through the ranks over a 40 year career to become Assistant Secretary-General under three Secretary-General.

He was known by some as "the philosopher of the UN" and his ideas about world government, world peace and spirituality led to the increased representation of spirituality in the UN.  As a visionary leader he was instrumental in the founding of numerous UN agencies and programmes, including UNDP and WFP. Muller received numerous awards and was nominated repeated times for the Peace Nobel Price.

"Are you happy? Decide to be happy! Happiness is a state of mind, a conscious, determined decision or will to embrace with fascination, enthusiasm the entire world and creation. Happiness is total consciousness. Happiness is not external to man, it is a genial force in him, an attribute, an essence of the human person."
-Robert Muller, former UN leader


His legacy lives on in many inspired coworkers and people, and also in the UN University for Peace in Costa Rica whose first Chancellor he became after retirement. Muller furthermore documented over 7000 'idea-dreams' who are disseminated in a daily, inspiring newsletter (sign up here).