I have been quite about my latest assignment so far... but since a Financial Times article came out yesterday, it’s time to talk about UNDP’s Growing Sustainable Business (GBS) initiative:

Enterprise introduces a whiff of revolution
In her book Dead Aid, Dambisa Moyo calls for the end of aid to Africa within five years. Paul Kagame, president of Rwanda – which has halved aid as a percentage of its gross domestic product in the past decade – recently argued in the Financial Times that aid creates instability and dependency while failing to reduce poverty or disease. Ms Moyo and Mr Kagame are among those questioning traditional models of development. While not all favour the pure for-profit approach, many argue that there is a greater role for market-based approaches to global problems. If such models prevail, the question for big non-governmental organisations (NGOs) and international public sector institutions is how to fit into the new development landscape…
“Business and society have to go through this utterly profound management transformation to move away from a few people running everyone else,” says Bill Drayton, founder of Ashoka the pioneering social entrepreneurship non-profit. “Because that model can’t function in a world with rapid change coming from all directions.” In contrast to the more nimble social entrepreneurs, organisations such as the World Bank and the UN can seem lumbering and out of touch. Some believe this stems from outdated management processes and sprawling bureaucratic structures…
Some institutions are also recognising their potential convening role in market-led initiatives. This is something the United Nations Development Programme is doing through its Growing Sustainable Business initiative. The idea behind the GSB is that the UNDP can broker partnerships between companies and NGOs or local government agencies to accelerate the provision of goods, services and employment in poor countries.
In Africa, one of the GSB partnerships – between Unilever, the consumer products group, and social and environmental institutions – is developing the Allanblackia tree into a new crop that will be a supplementary source of oil for Unilever products as well as an additional income stream for farmers…”

12 Simple Things You Can Do to Reduce Your Carbon Footprint 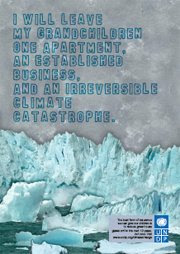 Some of these tipps might sound trivial but I do scratch my head when colleagues in my office do not turn off their PCs in the evening or car drivers let their engine run while waiting in their car for long...

Let's lead by example, therefore 12 Simple Things You Can Do to Reduce Your Carbon Footprint from UNDP (see full ad here):


Refer this site to a friend: www.12simplethings.org

Yunus: The Authenticity and Simplicity of a Noble Peace Winner 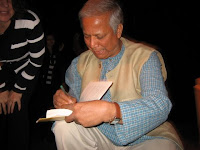 Recently I attended an inspiring talk by peace noble laureate Prof. Muhammad Yunus. This blog has covered him extensively because ever since I am exploring the cross-roads of business approaches to social and sustainable development Yunus has been an idol for me. The talk - which was facilitated by Jeffrey Sachs - was inspiring on two fronts: scale of achievements and his personal charisma.

First, how many example in the development are do you know having positive benefits for millions of people? Frankly, I do not know many. Even now working for UN's Development Programme, I see how even multi-million programmes of the largest development agencies and biggest brands in the world struggle to deliver tangible results, let alone of that scale. Now he has already touched nearly 8 million lives, mainly of marginalized women.

Second, I am touched at heart how humble and authentic Yunus is. A man sitting in Bangladeshi textile with a near Dalai Lama smile talking about over 30 years of his life with such an empathy for his country women and simplicity. He doesn't use any jargon, theories or buzz words. Yunus says, he just wanted to be of use for at least 1 person. Isn't that an example to follow?

Let's make a difference to at least one person and the world will be a better place. Yes we can! A wise man said once "If Not Me, Then Who? If Not Now, Then When?".