Businessmen, the Planet Needs You 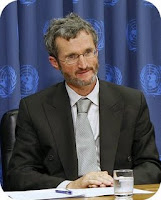 "As negotiating teams labor at the U.N. climate change conference, a rising chorus of business leaders is chanting “seal the deal.”

Though notions of hammering out an actual climate treaty in Copenhagen have been put to rest, many captains of industry are nonetheless urging governments to agree on the core elements of a climate framework that can serve the basis of a treaty. ...

But given the level of inaction and the counteracting forces of organized opposition, further steps will be needed to truly tip the scale in favor of positive business action.
First, progressive businesses must take their case to the industry fence-sitters through an active outreach campaign that includes a number of key messages:
1. climate change is the test of business leadership in the 21st century;
2. the future of the global marketplace hangs in the balance;
3. addressing climate can trigger an era of sustainable prosperity;
4. transformation is possible and viable; and
5. climate change is an urgent ethical issue for the broader role business in society.
Of course, it would be naïve not to acknowledge that there will be industry losers in the end. There will be those companies and sectors that are just too entrenched in the high-carbon economy to adapt and change.
A second action must involve the further mobilization of key stakeholders — most notably civil society, consumers and the investment community. ...
Achieving the low-carbon economy of the future will not be possible without the active role of business. Some have taken up the challenge. It is time for the fence-sitters to join this effort."
Read the full op-ed at New York Times.